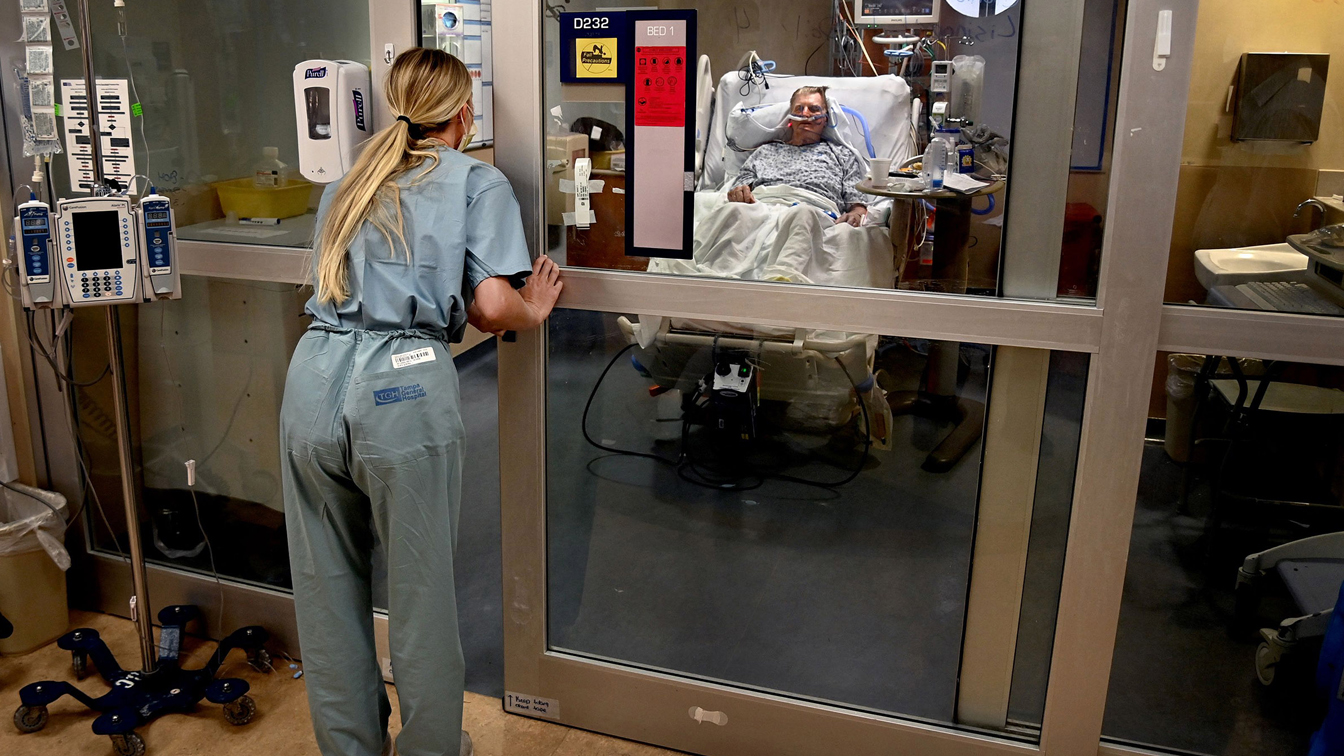 As the nation fights a new surge of COVID-19 cases driven by the highly contagious Delta variant and continued vaccine hesitancy, Florida has quickly become the epicenter of the pandemic in the United States.

This week, the state has shattered its records for the number of COVID-19 patients in hospitals. Admissions have grown tenfold statewide in just over a month, and hospitals throughout the state are again facing overwhelming demand, with their COVID-19 wards filling after nearly emptying in June.

Alix Zacharski, a nurse manager of a COVID-19 intensive care unit at Miami’s Jackson Memorial Hospital, told Yahoo News that she and her team have been continuously caring for COVID-19 patients since the pandemic began last year, but that their patient roster had decreased significantly in the past two months, giving her staff a much-needed break. That has quickly changed again. Last week, her eight-bed ICU had to be expanded to care for a new surge of COVID patients fueled by the hypercontagious Delta variant.

“As of Friday, July 30, we went from eight beds to 24 beds, so it just tripled right away,” Zacharski said. “I would not be surprised if I have to expand even more in the next two weeks.”

Florida’s seven-day average of new cases was 17,756 as of Aug. 3, a 700 percent increase over the seven-day average of 2,195 on July 3. The state now also leads the nation in per capita hospitalizations for COVID-19, with 12,408 people hospitalized as of Wednesday, according to data reported by the U.S. Department of Health and Human Services.

After the admissions of the last three consecutive days, Florida has broken its record for total hospitalizations of 10,170 set in July of last year, which had been the worst month for COVID hospitalizations in the state since the pandemic began.

Jackson Memorial Hospital, where Zacharski works, is Florida’s largest public hospital. As of Thursday, the Jackson Health System had 305 COVID-19-positive inpatients. That is fewer than the 485 patients it had on July 27, 2020, during its pandemic peak, but a substantial increase nevertheless, which has prompted the hospital to once again limit visitors. Other hospitals in South Florida beginning to feel the impact of this surge have also taken extra measures, such as temporarily suspending elective surgeries.

“Unfortunately, there’s not a surplus of multiple beds or multiple interventions, and multiple equipment to be able to treat everyone at the same time, so this is a big impact that we place, and a big burden that we place, on other parts of the health care system,” Zacharski said.

Similarly to what other hospitals across the nation have been reporting, Zacharski said this COVID-19 surge is different, in that the patients are younger.

“I have had to say goodbye to young people. Last Friday, we lost a 27-year-old and a 54-year-old side by side that were extremely ill,” she said.

According to Jackson, 90 percent of its COVID-19 patients are unvaccinated. The hospital system has also admitted some vaccinated patients, but of the 28 who had been inoculated, 21 were immunocompromised transplant patients, who often don’t respond to coronavirus vaccines because they are not as likely to generate as robust an immune response.

In Miami-Dade County, about 61 percent of residents are fully vaccinated. That’s higher than the state average of 48.8 percent and the national average of almost 50 percent, but still short of the 70 percent mark that experts initially believed could provide herd immunity to protect people unable to receive the vaccine due to underlying health conditions. However, since the Delta variant is more contagious, experts now believe that the threshold for herd immunity will be higher, and that 70 percent may not be enough to prevent the spread of the virus.

Infectious-disease experts also say these outbreaks can happen even in places with higher vaccination rates, like Miami-Dade. Large gaps in immunity can be opened, they say, with the lower rates of vaccination among younger people, who are more likely to socialize and gather in larger groups.

Another factor that experts say is contributing to this new surge, besides the more contagious variant, is the relaxing of important mitigation measures designed to curb the spread of the virus. The Republican governor of Florida, Ron DeSantis, has resisted mandatory mask mandates and vaccine requirements. Last Friday, he barred school districts from requiring students to wear masks when classes resume next month.

Public health officials and local elected leaders say that they have pressed the DeSantis administration to take more drastic steps to bring the virus under control, but that the governor has limited their ability to impose these necessary mitigation measures. At a press conference Tuesday, while the state was breaking yet another hospitalization record, DeSantis doubled down, insisting that the current spike will soon subside and that he will not impose any business restrictions or mask mandates.

“We are not shutting down,” he said. “We are going to have schools open. We are protecting every Floridian’s job in this state. We are protecting people’s small businesses. These interventions have failed time and time again throughout this pandemic, not just in the United States but abroad. They have not stopped the spread, particularly with Delta.”

Dr. Bernard Ashby, a Miami cardiologist and Florida state lead for the Committee to Protect Health Care, told Yahoo News that DeSantis’s decision to ban mask mandates in schools is yet another example of the governor turning a public health issue into a political one.

“I really need him to get the message and understand that our lives are more important than politics. People over politics,” Ashby said. “We have tons and tons of data that indicate that masks decrease the transmission of SARS-CoV-2. Yet he’s banning municipalities from making that decision, and that’s something that is reckless and actually detrimental, not only to the health of students but to teachers and the rest of the community, because these students can serve as vectors for further spread of this Delta variant.”

For Zacharski, treating COVID-19 patients continues to be “physically exhausting and emotionally draining.” It is especially challenging these days, she said, because she and her staff are still tired from the previous surge.

She described this variant of the virus as “very aggressive,” adding that many patients arrive at the hospital already very ill and needing intensive care almost immediately. “They just can’t seem to be catching their breath. … They’re requiring more oxygenation,” she said, noting that such patients often then need to be intubated.

Witnessing this, she said, is dispiriting to hospital staff, given that vaccines have been shown to be safe and effective and to protect against severe illness and hospitalization.

“I recommend you to please vaccinate. If you’re not vaccinated, please consider it seriously,” Zacharski said. “Help us to help you. … Don’t let us be your nurse at this time.”