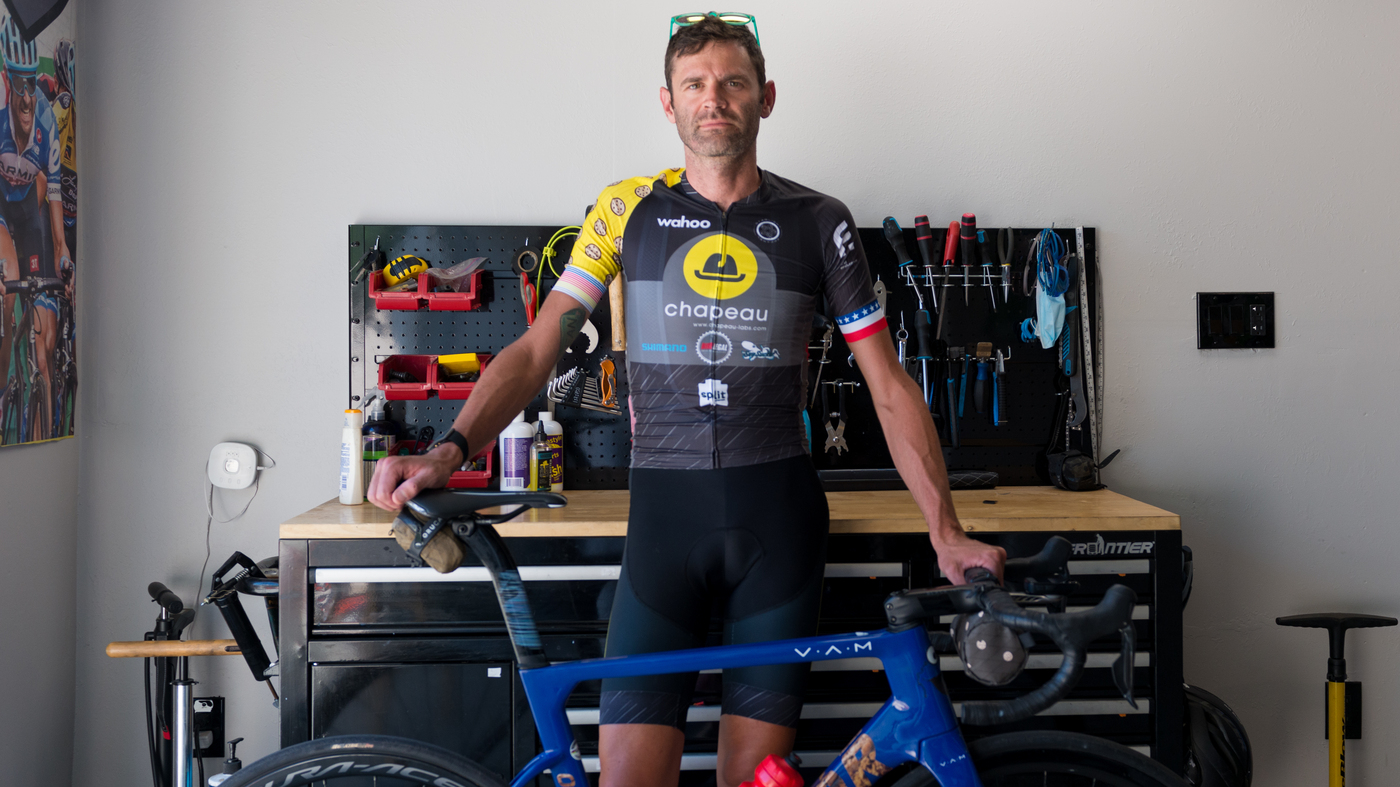 Phil Gaimon was racing for a spot in the Olympics when he crashed with a fellow cyclist. He sailed over the handlebars and hit the ground hard. The result: a fractured collarbone, five broken ribs, a partially collapsed lung, a broken shoulder blade and huge medical bills.

Phil Gaimon was racing for a spot in the Olympics when he crashed with a fellow cyclist. He sailed over the handlebars and hit the ground hard. The result: a fractured collarbone, five broken ribs, a partially collapsed lung, a broken shoulder blade and huge medical bills.

It was a race in Pennsylvania that could have sent cyclist Phil Gaimon to the Tokyo Olympics; instead, a serious crash landed the Californian in two hospitals on the East Coast.

Gaimon knows accidents are, unfortunately, part of the sport. He had retired from competitive road cycling three years earlier, but a recruiting call came in the spring of 2019 from a coach of the USA Cycling track team.

The coach needed speed for a four-man event. At the time, Gaimon was making a name for himself — and money — by mountain racing, and he was setting records.

But his Olympic dreams were short-lived. In a sprint with a pack of riders at the velodrome track in eastern Pennsylvania, Gaimon sailed over his handlebars after colliding with a fellow racer. Gaimon hit the ground hard. The result: a fractured collarbone, five broken ribs, a partially collapsed lung and a broken scapula — injuries worse than any he had suffered in the 10 years he had raced on pro road teams in the U.S. and Europe.

An ambulance whisked him to Lehigh Valley Hospital in Allentown, Pa., which is part of the health system that sponsored the cycling event. Emergency doctors admitted the athlete, and he underwent surgery on his collarbone. He also needed surgery on his scapula (shoulder blade), which he said felt “like a collapsed taco.” But that surgery would happen days later, after he was discharged from the Pennsylvania hospital and a friend helped him find a surgeon in New York.

He chronicled the whole ordeal on his social media channels, and soon he was recuperating — painfully, but successfully — back home. And then the bills came.

Total bills: $151,804 from Lehigh Valley Health Network and $49,526 from the Hospital for Special Surgery. He had additional bills from various physicians. Health Net has paid approximately $27,000 to Lehigh Valley, according to Gaimon. His secondary insurance, with USA Cycling, paid $25,000 to the Hospital for Special Surgery and his surgeon there.

Medical procedure: surgery for a fractured collarbone at Lehigh Valley Hospital and surgery for a broken scapula at the Hospital for Special Surgery.

What gives: Gaimon collided with three health system dangers in this physically and financially painful crash: an out-of-state emergency, out-of-network care and gold-plated prices from both hospitals that treated him. Gaimon said he could sell his house and pay these bills, “but I shouldn’t have to. I have insurance.”

His situation is a scenario that many patients have encountered when they need emergency care outside their provider’s network. It’s known in medical jargon as “balance billing.” Hospitals and insurance companies without mutual contracts often don’t agree on the price of services, and the patient is left to pay the difference.

While at least 33 states have enacted laws intended to protect consumers from balance billing, many don’t apply to out-of-state patients, said Maanasa Kona, an assistant research professor at the Center on Health Insurance Reforms at Georgetown University.

For example, in Gaimon’s home state of California, state law protects enrollees in state-licensed health plans from balance billing, but their authority is limited to California doctors and hospitals.

“These state laws depend upon the state having jurisdiction over the providers involved,” Kona said. “So nothing is going to stop out-of-state providers from sending bills and hounding the patient. It’s a major gap.”

In Gaimon’s case, the validity of the hospital’s charges is also questionable. Lehigh Valley Health Network is notorious for big markups on care for out-of-network patients, said Dr. Merrit Quarum, chief executive of WellRithms, which scrutinizes medical bills for self-funded employers and other clients nationwide. “There’s no rhyme or reason as to how they’re charging compared to their costs,” Quarum said.

WellRithms reviewed Gaimon’s bills in detail at the request of KHN and determined that a reasonable reimbursement for the care he received at Lehigh Valley Hospital would have been $21,000. That’s $6,000 less than what Health Net has already paid.

In an email to KHN, Lehigh Valley Health Network spokesperson Brian Downs called the calculations by WellRithms “flawed” and said it is not appropriate to use Medicare-based rates to determine medical costs because they “are not reflective of the actual cost incurred by a provider in rendering any specific medical service.” WellRithms didn’t use Medicare rates, however. It looked up the amounts that Lehigh told Medicare it costs the health system to perform a wide range of services.

One reason cited by WellRithms for Gaimon’s high bill: Lehigh Valley Hospital charged him $25,915 for a night in the intensive care unit and $29,785 for a night in the burn unit, according to an explanation of benefits sent to Gaimon by Health Net in January 2020. Gaimon understood he was placed in these specialty units because of a lack of space in other parts of the hospital. But Downs, in his statement, said Gaimon needed the burn unit due to his abrasions and the ICU after his collarbone surgery.

Gaimon’s $49,526 bill from the Hospital for Special Surgery posed other patient-billing land mines.

Phil Gaimon knows accidents are part of his sport. He had retired from competitive road cycling three years earlier, but a recruiting call came in the spring of 2019 from a coach of the USA Cycling track team.

Phil Gaimon knows accidents are part of his sport. He had retired from competitive road cycling three years earlier, but a recruiting call came in the spring of 2019 from a coach of the USA Cycling track team.

He recalled representatives from the hospital and his insurance plan telling him that he would be billed as an out-of-network patient, but they assured him that he could file an appeal because of the extenuating circumstances. And he had secondary insurance offered by USA Cycling that would cover $25,000 for the shoulder surgery, which it did, according to billing records.

He expected his primary insurer, Health Net, to pay some of the cost too.

But in an Oct. 19, 2019, letter, Health Net denied Gaimon’s appeal because he “self-referred” himself to a surgeon in New York. It also described the surgery as “outpatient” even though he spent the night at the hospital. The letter went on to say the Hospital for Special Surgery had categorized the surgery as elective.

Given his level of pain and the fact that surgeons at the first hospital didn’t perform the scapula surgery during his stay, he figured there was nothing “elective” about it. “I needed this surgery, and no one else could do it,” Gaimon said.

Health Net spokesperson Darrel Ng declined to comment, saying it doesn’t comment on specific member cases, even though Gaimon gave written permission for his case to be discussed.

A reasonable reimbursement for Gaimon’s out-of-network scapula surgery would have been $13,908, according to WellRithms. Historically, the hospital’s average charge for that surgery was nearly $11,000, even though it cost only $3,094 to perform in the year that Gaimon had his surgery, WellRithms found in the 2019 annual cost report that the hospital submitted to the federal government.

Resolution: Battling these bills became Gaimon’s full-time job as he recovered from surgery. And almost two years after the crash, he still faces huge bills from both hospitals despite both hospitals having been paid tens of thousands of dollars through Gaimon’s insurance coverage.

After a reporter made inquiries, a representative from the Hospital for Special Surgery (HSS) called Gaimon, offering to help him apply for financial assistance based on his income.

In a statement, HSS spokesperson Noelle Carnevale said, “We regret Mr. Gaimon’s dispute with his insurance provider’s classification of the surgery as elective.” And she added, “We are optimistic for an easy resolution, and look forward to celebrating his continuing achievements.”

Gaimon spent months calling and writing letters to Health Net to persuade it to cover the emergency room visit and the collarbone surgery. So far, he has been unsuccessful.

Congress last December passed legislation intended to protect patients like Gaimon against unexpected bills from out-of-network providers. Starting next year, when the law takes effect, patients can be charged only up to the amount of their deductible or copayment when receiving emergency care at any hospital.

The takeaway: The federal protections against unforeseen medical bills for emergency care kick in Jan. 1, 2022. So if you travel out of state this year, you should be aware that many state-based insurance plans might not cover you fully or at all in another state.

If you’re in possession of a surprise or balance bill for out-of-state emergency care, contact your health insurance plan and make sure representatives understand that it was an emergency. Call the hospital and ask about financial assistance or charity care.

And be aware that the new federal law doesn’t cover everything. Should you be taken to the hospital by a ground ambulance service that’s not in your insurance plan’s network, for example, you could still be on the hook for a large bill.

“There will always be some surprises because the hospital or the doctors are going to find a way to get you uncovered by the law,” said Gerard Anderson, director of the Center for Hospital Finance and Management at Johns Hopkins University’s Bloomberg School of Public Health. “It’s always a game of whack-a-mole.”

Stephanie O’Neill contributed the audio profile with this report.

Bill of the Month is a crowdsourced investigation by KHN and NPR that dissects and explains medical bills. Do you have an interesting medical bill you want to share with us? Tell us about it.