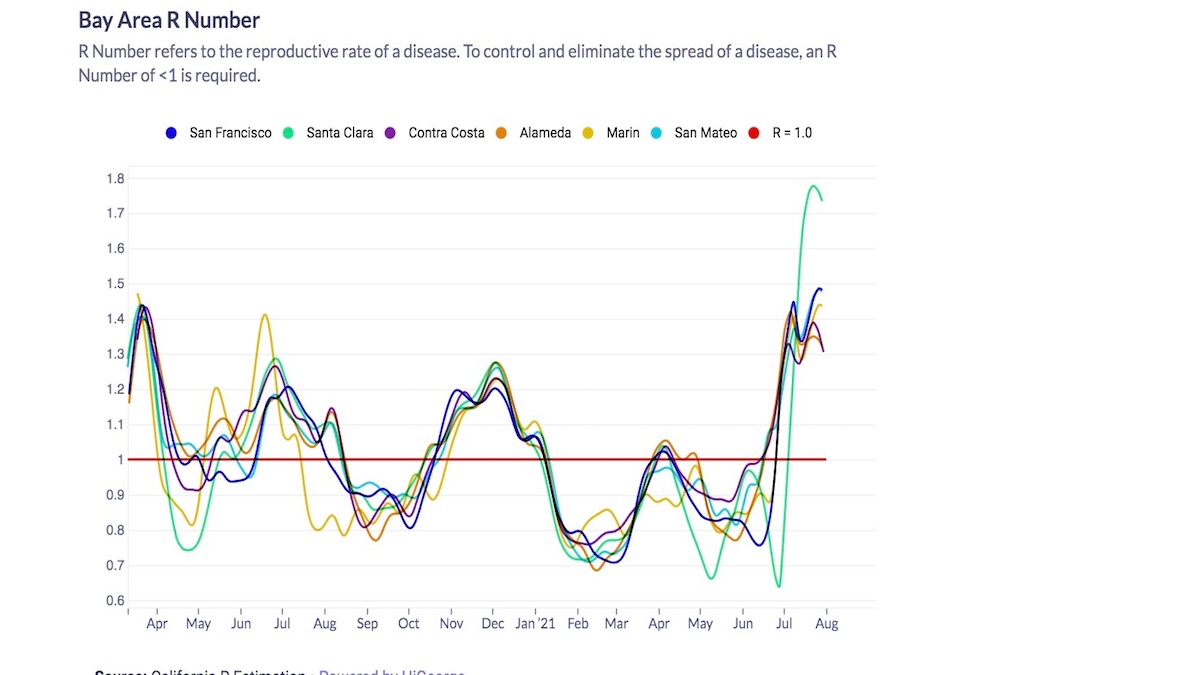 With interpretations overtaking facts, it’s been a great weekend for post-modern Covid trackers.

After the CDC changed its guidance on masking indoors due to an outbreak in Provincetown MA (and the underlying data leaked), a flood of headlines and tweets suggested vaccination might not prevent transmissibility or even hospitalization as well as we thought. Then others, using the same data and facts pointed out Provincetown was safe, and actually proved the remarkable efficacy of the vaccine.

If you only have time for one article on the threat (and uncertainty) of the Delta variant and The Vaccine, try this one from New York Magazine, one of the more sober and reasonable pieces I’ve seen.

Even a little word like “at” can have conflicting interpretations with consequences. Perhaps you’ve seen reports of an outbreak at UCSF and SFGH among 233 staffers, most of whom were vaccinated. UCSF doc Bob Wachter criticized the Times for “sloppy wording” and said that none of the infected picked up Covid “at” the hospital but through community transmission.

Wow! What great contact tracing. Maybe they can teach the City how to do it.

Will other businesses and institutions make the same argument? Last year the state legislature passed a law making it mandatory for businesses to report outbreaks. To date there has been little or any investigation or enforcement for those who have reported.

With that in mind let’s cheer Lolo’s, which closed because a staff member tested positive. A place to go for responsible dining.

And the Latino Task Force will be providing free tests for Covid, HIV and Diabetes.

Scroll down for today’s Covid numbers and the return of our R number graph.

The CDC data used for the chart lags behind the data supplied from SFDPH. As of August 1, DPH reports over 76 percent of all San Francisco residents have received one dose, and over 70 percent  are completely vaccinated.  On August 1, the seven-day rolling average of shots per day to new recipients was 556. For information on where to get vaccinated in and around the Mission, visit our Vaccination Page.

As you can see, hospitalizations are rapidly increasing, driven mainly by Acute Care patients. Last summer while cases peaked at an average of 131 per day, the peak number of hospitalizations was 104. In the winter surge the peak average daily case number was 373 and peak number was 256. SFDPH said the total number of vaccinated patients (thoughout the pandemic) is 16 and that they will be providing weekly updates on vaccinated and unvaccinated patients.

DPH has reported 2 new Covid-related deaths in July bringing July’s total to 5 and the cumulative total to 563. That figure is considered “less reliable” so the “real” number is probably higher.

Covid R Estimation is back in business, estimating the current R Number for San Francisco at 1.48, one of the highest in the state, which it places at 1.09, the lowest in the country. The ensemble estimates the San Francisco R Number at 1.24 and the California R Number at 1.34. Remember the R number is an average individual transmission rate, and as we’ve seen over the past year, reflects a great deal of uncertainty. However, today’s numbers confirm Delta’s highly contagious nature in the City.